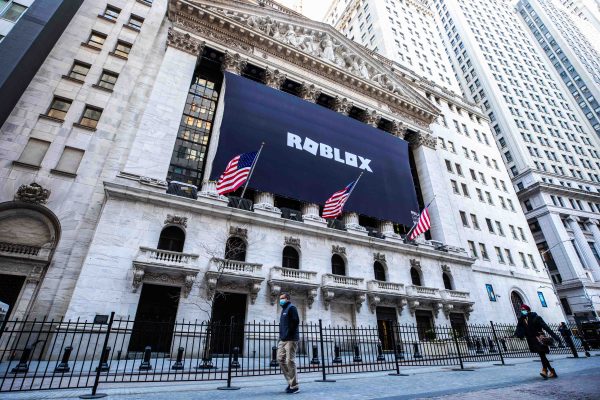 Here’s how the company did:

The revenue figure is what Roblox calls bookings, which include sales recognized during the quarter and deferred revenue. Bookings rose by 10% year over year. The company generates revenue from sales of its virtual currency called Robux, which players use to dress up their avatars and buy other premium features in the games.

Roblox reported 58.8 million average daily active users, up 24% from a year earlier, and up from the 52.2 million daily active users it reported in its second quarter. Users spent more than 13.4 billion hours engaged in Roblox during the third quarter.

Roblox said average bookings per daily active user was $11.94, down 11% year over year.

The company saw bookings swell more than 200% during the pandemic when kids were spending more time on their screens while stuck at home. The stock was blazing hot in 2021, after Roblox’s direct listing in March. Its market cap neared $80 billion before peaking in November 2021. Shares are down about 62% so far this year.

Roblox will hold its quarterly call with investors at 8:30 a.m. ET on Wednesday.

Elon Musk said in court on Wednesday that he does not want to be the CEO of any company.

Musk also confirmed that the arrangement at Twitter is temporary. “I expect to reduce my time at Twitter and find somebody else to run Twitter over time,” he said.

Musk and Tesla are in the midst of a trial over the 2018 CEO pay package that the company granted him, an unparalleled compensation plan that has made Musk a centi-billionaire and the richest person on the planet.

Shareholder Richard J. Tornetta has sued Musk and Tesla alleging that the CEO compensation was excessive, and that its authorization by the Tesla board amounted to a breach of its fiduciary duty.

Musk also said during the testimony that CEO is not necessarily an apt description for the work he thinks he does at his companies.

He said, “At SpaceX it’s really that I’m responsible for the engineering of the rockets and Tesla for the technology in the car that makes it successful. So, CEO is often viewed as somewhat of a business focused role but in reality, my role is much more that of an engineer developing technology and making sure that we develop breakthrough technologies and that we have a team of incredible engineers who can achieve those goals.”

He also said, “It’s my experience that great engineers will only work for a great engineer. That is my first duty, not that of CEO.”

Attorneys for Tornetta also asked Musk about a CNBC report that he had authorized at least 50 Tesla employees, mostly Autopilot engineers, to help with his work at Twitter, now that he owns the social media company.

Musk said he only called on Tesla employees to assist him at Twitter on a “voluntary basis,” and to work “after-hours” at Twitter. He said that no Tesla board member had called him to say it is not a good idea to use Tesla resources for one of his other, privately-held companies.

The Tesla CEO specified that, “This was an after hours– just if you’re interested in evaluating, helping me evaluate the Twitter… that’d be nice. I think it lasted for a few days and it was over.”

When a lawyer asked if he thought it was a good idea to be using Tesla assets at Twitter, Musk responded, “I didn’t think of this as using Tesla assets…There’s 120,000 people at the company. This is de minimis.”

With all of his business commitments, Musk explained during his testimony that Tesla has taken more time than anything in recent years.

Attorneys for the plaintiffs in the trial asked Musk whether it was a good idea to strike a combative attitude towards regulators, and specifically asked him about prior insults he lobbed at the Securities and Exchange Commission.

“In general, I think the mission of the SEC is good but the question is whether that mission is being executed well,” he replied.

“In some cases I think it is not. The SEC fails to investigate things that they should and places far too much attention on thing that are not relevant. The recent FTX thing I think is an example of that. Why was there no attention given to FTX? Investors lost billions. Yet the SEC continues to hound me despite shareholders being greatly rewarded. This makes no sense.”

In fact, the SEC and several other regulators have reportedly launched an investigations into collapsed crypto firm FTX, but it’s not clear if those investigations started prior to the firm’s sudden bankruptcy last week.

This news is developing, please check back for updates.

San Francisco Federal Reserve President Mary Daly said Wednesday she expects the central bank to raise interest rates at least another percentage point, and possibly more, before it can pause to evaluate how the inflation fight is going.

Daly told CNBC in a live interview that her most recent estimate in the Fed’s summary of economic projections puts the benchmark overnight lending rate around 5%. She added that the right range is probably from 4.75% to 5.25% from its current targeted range of 3.75%-4%.

“I still think of that as a reasonable landing place for us before we hold, and the holding part is really important,” she told Steve Liesman during the “Squawk on the Street” interview. “It’s a raise-to-hold strategy.”

Thus far, the Fed has hiked the fed funds rate, which spills over into a slew of other consumer debt products, six times, including four consecutive 0.75 percentage point moves.

Looking ahead, market pricing is largely in line with what Daly suggested. Traders see the central bank adding another 0.5 percentage point when it meets again in mid-December, then moving a bit higher before stopping around the 4.75%-5% range.

Daly said she sees a point where the Fed will be able to evaluate the impact of its hikes before moving higher, but that is not now.

“Pausing is off the table right now. It’s not even part of the discussion,” she said. “Right now, the discussion is rightly around slowing the pace and … focusing our attention really on what is the level of interest rates that will end up being sufficiently restrictive.”

The Fed is using its primary tool of interest rate increases to right inflation that still is around its highest level in more than 40 years.

Over the past week, the news has gotten at least incrementally better: The consumer price index rose a less-than-expected 0.4% in October, while the producer price index increased just 0.2%. Both price measures are off their highs, running at respective annual rates of 7.7% and 8%, but still well above the Fed’s 2% target.

Daly said she saw an easing of core goods inflation as “positive news” and is encouraged by the general slowing in the economy.

“Consumers are stepping back, they’re changing how they allocate spending. They’re dealing with high inflation, of course. They have to make trade-offs, put things back that they would otherwise get. But they’re also preparing for a slower economy,” she said. “That’s a very good start.”

Yet data Wednesday showed that spending is keeping up with inflation, as retail sales rose a slightly better than expected 1.3% in October. Early data is showing GDP is accelerating at a 4% pace in the fourth quarter, according to the Atlanta Fed.

Daly said she expects higher rates to continue to have an impact on the economy and bring inflation back in line.

“When we raise it and hold, over time as we’re holding monetary policy is becoming tighter as inflation comes down, so that’s another factor we’ll have to consider,” she said.

She added that her goal is to bring inflation down “as efficiently and as gently as we can.”

The CEO of the largest online exchange for trading cryptocurrency, Binance, said he is establishing a recovery fund to help people in the industry, while saying the sector “will be fine.”
Ben McShane / Contributor / Getty Images

The CEO of the largest online exchange for trading cryptocurrency said Wednesday that he’s establishing a recovery fund to help people in the industry while saying the sector “will be fine.”

‘Big Short’ Michael Burry on his current positioning: ‘You have no idea how short I am’
Yun Li
an hour ago

“That’s not to say we can save everybody. If a project is mismanaged on multiple fronts we won’t be able to help them anyway.”

Zhao said cryptocurrency had “shown extreme resilience,” suggesting he didn’t expect recent turbulence in the industry to cause long-term damage. He did not specify an exact figure for the size of the recovery fund.

His comments come just a week after Binance backed out of a deal to rescue rival exchange FTX, which declared bankruptcy Friday.

The price of bitcoincould lead to the downfall of other big industry names, such as Crypto.com. The company’s CEO denied the claims and said the platform was “performing business as usual.”

The CEO on Monday said Binance had seen a “slight increase in withdrawals” in the last week, but he said this was in line with other dips in the market.

“Whenever prices drop, we see an uptick in withdrawals,” Zhao said. “That’s quite normal.”

Regulations will help, but they won’t fix everything

Zhao said he wants to form an organization that could “establish best practices” across the industry, which is known for its lack of regulation.

“Regulations need to be adapted for this industry,” Zhao said. “Regulation won’t fix all of this, it will reduce it. It’s important but we’ve got to have the right expectations,” he added.

Zhao reflected on how there were elements of traditional finance that could help the cryptocurrency market to become more regulated and better trusted, but practices would need to be adapted to be fit for purpose.

The “transparency” and “audit” aspects of traditional finance could benefit the crypto industry, but there are “subtle but very important” differences that would need to be made, according to the CEO.

“Too many regulators are more of a traditional mindset, they need to get a crypto mindset,” he said

The comments echo those made by Ripple CEO Brad Garlinghouse, who said the idea that crypto is “not regulated is overstated,” but that “transparency builds trust.”

“Crypto has never just been sunshine and roses and as an industry, it needs to mature,” Garlinghouse said on CNBC’s “Squawk Box Europe” Wednesday.

Economist Nouriel Roubini took a different line in his Abu Dhabi Finance Week interview and described crypto and some of its major players as an “ecosystem that is totally corrupt.”

— CNBC’s Jenni Reid and Ryan Browne contributed to this report.