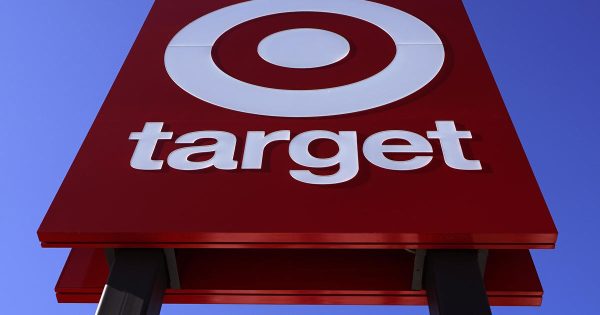 Target on Wednesday said its quarterly profit fell nearly 90% from a year ago, as the retailer followed through on its warning that steep markdowns on unwanted merchandise would weigh on its bottom line.

The big-box retailer missed Wall Street’s expectations by a wide margin, even after the company itself lowered guidance twice.

Yet the company reiterated its full-year forecast, saying it is now positioned for a rebound. It said it expects full-year revenue growth in the low to mid single digits. Target also said its operating margin rate will be in a range around 6% in the second half of the year. That would represent a jump from its operating margin rate of 1.2% in the fiscal second quarter.

Shares of Target fell more than 2% in early trading.

Chief Financial Officer Michael Fiddelke defended Target’s aggressive inventory efforts. He said the retailer had to move swiftly, so it could clear the clutter, gear up for the holidays and navigate an economic backdrop clouded by inflation.

“If we hadn’t dealt with our excess inventory head on, we could have avoided some short-term pain on the profit line, but that would have hampered our longer-term potential,” he said on a call with reporters. “While our quarterly profit took a meaningful step down, our future path is brighter.”

Here’s how Target did for the three-month period ended July 30, compared with Refinitiv consensus estimates:

Target has had a sharp reversal of fortunes over the past two quarters. After posting quarter after quarter of eye-popping sales numbers during the Covid pandemic, it has seen clothing, coffee makers, lamps and more linger on the shelf – and then get kicked to the clearance rack. Some of that excess merchandise is the same stuff that sold out during earlier parts of the pandemic, when shoppers snapped up home decor and loungewear.

The turnabout forced the big-box retailer to cut its profit outlook twice, once in May and then again in June, and to pledge to move quickly to get its inventory level to a healthier place.

But CEO Brian Cornell said on the call with reporters that it is a more favorable mix, as Target leans into high-frequency categories like food and household essentials along with popular categories like seasonal merchandise. It canceled more than $1.5 billion in orders for discretionary categories with lower demand.

Fiddelke said the inventory number is larger because of cost inflation and receiving inventory earlier to make sure Target is ready for the holidays.

Total revenue rose to $26.04 billion from $25.16 billion a year ago, driven partially by higher prices due to inflation.

Quarterly profits got squeezed in many different ways. Sales of a lot of merchandise became less profitable as it got marked down. Freight, transportation and shipping costs rose, as fuel prices increased. And the company had to add head count and cover more compensation in distribution centers as it dealt with a glut of extra stuff.

Big-box rival Walmart said Tuesday that it had seen a marked shift in consumer behavior, as even wealthier households sought deals on groceries and essentials. The company told CNBC that about three-quarters of its market share gains in food came from households with an annual income of $100,000 or more.

Target, on the other hand, said it is not seeing as much inflation-fueled change. Sales by unit grew in all five of its major merchandise categories, with particular strength in two categories: food and beverage, and beauty and household essentials.

Even as profits fell, comparable sales and traffic rose.

Comparable sales, a key metric that tracks sales online and at stores open at least 13 months, grew 2.6% in the second quarter, on top of an increase of 8.9% last year. That fell just short of estimates, which anticipated a 2.8% rise, according to StreetAccount.At Target’s stores and on its website, traffic increased 2.7% year over year.

Fiddelke, the CFO, said the traffic growth isproof that shoppers still have spending power and will help Target deliver on its rosier profit outlook for the back half of the year.

“The resilience of that strong guest response positions us well, even if I can’t predict every curveball that might come at us in the fall season,” he said on the call with reporters.

Food and beverage was Target’s strongest category in the three-month period, with comparable sales growth in the low double digits, the company said. Beauty grew in the high single digits, as Target adds Ulta Beauty shops inside of more stores. And essentials grew in the mid single digits, fueled by pet supplies and health-care items.

Comparable sales in discretionary merchandise categories noticeably softened, but added up to nearly $3.5 billion or more than 35% higher than the same period in 2019. Sales of hardlines, a category that include electronics, were down slightly year over year. Home declined by low single digits. And apparel dropped by the low single digits, despite sales growth of women’s fashion-forward clothing.

Fiddelke said consumers vary by geography and income level, and they seek value in different ways. For example, some are buying bigger packs to save more per unit or trying one of Target’s lower-priced private labels instead of a national brand.

Cornell said Target is watching consumer spending closely. He said it is stocking up on popular items and ordering fewer of goods that shoppers may skip over.

“We’re going to take a very balanced approach,” he said, making sure to “plan cautiously” in discretionary categories where the company has seen shifts in behavior.

Ona call with analysts on Wednesday, Target’s chief growth officer, Christina Hennington, said the retailer has spoken with customers to get a better sense of their mindset. As they feel inflation, they are stretching the budget by taking advantage of promotions and consolidating store trips, she said. It found that Target shoppers still have spending power, but that “confidence in their personal finances continues to wane.”

As of Tuesday’s close, Target’s shares are down about 22% so far this year. The stock closed Tuesday at $180.19, rising nearly 5% that day after Walmart beat earnings expectations.

(The press conference is scheduled to start at 11:30 a.m. ET. Please refresh the page if the above video doesn’t start at that time.)

The Nassau County Republican Committee and dozens of local elected GOP officials from New York are making a “major announcement” on Wednesday about freshman Rep. George Santos, R-N.Y. who is under scrutiny by federal and local lawmakers for embellishing key elements of his resume.

The Republican county political committee, which is chaired by Joseph Cairo, said in press release announcing the event that Santos is a “disgraced” member of Congress, but he did not provide details on the upcoming remarks. Santos has been caught embellishing and, at times, outright lying, about his past, including his claims that he worked on Wall Street.

Santos has apologized to anyone “disappointed by resume embellishments,” but he vehemently denies committing any crimes.

Cairo has previously said that Santos has “broken the public trust by making serious misstatements regarding his background, experience and education, among other issues.” As a member of Congress, Santos represents parts of Queens and Nassau County, a region of Long Island in New York. House Republican leadership have been quiet regarding Santos since he’s been sworn into Congress.

“Obviously, he’s addressed some of the concerns that we’ve had. In New York, they’re having a lot of internal conversations too. But at the end of the day, you know, he was seated, nobody objected to him being seated,” House Republican Majority Leader Steve Scalise, R-La., told CNBC on Wednesday after being asked whether Santos will serve his full two-year term.

Santos has said that all he’s guilty of is embellishing his resume and has committed no crimes.

The lies and embellishments he told during the election have also led to scrutiny from prosecutors in the Eastern District of New York who are examining Santos’ finances, including potential irregularities involving financial disclosures and an over $700,000 loan Santos made to his campaign while he was running for Congress during the 2022 midterms, according to NBC News.

Santos’ fundraising efforts during his successful 2022 run was also based, in part, on some of the false claims he’s made about his past. He would suggest to donors that he was Jewish when he was not and falsely told people he worked at Wall Street banks that don’t have any record of his employment. A Santos campaign staffer impersonated as Kevin McCarthy’s chief of staff in order to raise money for the campaign, CNBC and The Washington Times reported.

A group of highly speculative stocks rallied double digits on Wednesday as retail investors pushed meme names up again in the new year following a dismal 2022.

The rally in Bed Bath & Beyond was initially triggered by news that it would lay off more employees in an attempt to reduce costs and stay in business.

The home goods retailer told employees that it is eliminating the chief transformation officer role, which is held by Anu Gupta, on the same day it reported disappointing fiscal third-quarter results. Bed Bath & Beyond is approaching a potential bankruptcy, as its sales decline and losses grow.

While the short interest in these names has come down from its peak after the jaw-dropping episode, it still remains much higher than average.

About 48% of Bed Bath & Beyond’s float shares are sold short, compared with an average of 5% short interest in a typical U.S. stock, according to S3 Partners. For GameStop, the short interest stands at 21%, down from more than 100% at the height of the meme stock mania in 2021, according to FactSet. AMC has also 21% of shares sold short.

A short squeeze happens when a stock jumps sharply higher, it forces short sellers to buy back shares in order to limit their losses. The short covering tends to fuel the stock’s rally further.

Bank of America downgrades Coinbase, says consensus estimates may be ‘way too high’ given the current crypto outlook
Samantha Subin
4 hours ago
Oppenheimer says buy Coinbase, as it can be one of the crypto world’s ‘long-term survivors’
Samantha Subin
a day ago

In 2023, Binance plans to increase the number of staff by between 15% and 30%, Zhao said at the Crypto Finance Conference in St. Moritz, Switzerland.

Rival exchanges have been forced to cut large parts of their workforces after nearly $1.4 trillion was wiped off the crypto market in 2022 and major digital currencies including bitcoinether

In November, Kraken announced it was laying off 30% of staff, and this year Huobi and Coinbasesecond round of job cuts for Coinbase in the last year.

Zhao said Binance needs to get the company “well-organized” ahead of the next crypto bull run and admitted the exchange is “not super efficient.”

“We will continue to build and hopefully we will ramp up again before the next bull market,” Zhao said.

The industry was plagued last year by collapses of major projects, liquidity issues, bankruptcies and the high-profile failure of crypto exchange FTX. Sam Bankman-Fried who founded FTX has been charged with eight criminal counts by U.S. prosecutors, including fraud. He has pleaded not guilty.

Binance had a big role to play in FTX’s collapse. In November, Binance offered to buy FTX’s non-U.S. businesses which were facing liquidity issues but then later backed out of the deal. Zhao said publicly his company was selling its holdings in FTX’s native token, FTT, which exacerbated the collapse of that digital coin, adding to FTX’s downward spiral.

Zhao has said he “did not master plan” the collapse of FTX.

In response to a CNBC question on the sidelines of the CFC St Moritz conference, the Binance CEO said the “actual damage is not that high” on the crypto industry from the FTX collapse. He said FTX “is not a big player, they just make a lot of noise.”

“There’s definitely damage [but] the industry will be fine,” Zhao said.