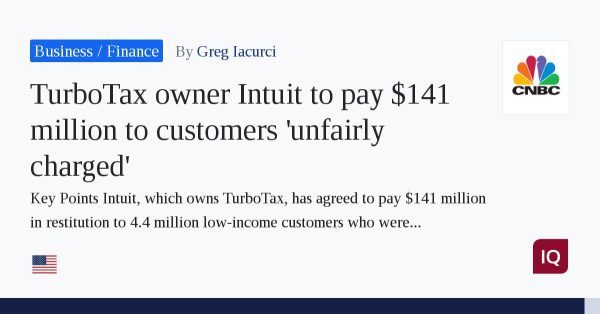 Intuit, the owner of popular tax-filing software TurboTax, will pay $141 million in restitution to millions of low-income Americans who were “unfairly charged” for services that should have been free, according to a multistate agreement announced Wednesday.

TurboTax also agreed to reform its business practices. For example, it must suspend a “free, free, free” advertising campaign that “lured” customers with the promise of free tax preparation but then asked them to pay, according to an announcement from New York Attorney General Letitia James.

All 50 states and the District of Columbia have signed the agreement.

Intuit will pay restitution to nearly 4.4 million consumers who used TurboTax’s Free Edition during tax years 2016 through 2018. These customers were told that they had to pay for the service despite being eligible to file for free via the IRS Free File program offered through TurboTax, according to the announcement.

Consumers are expected to receive about $30 for each year they paid for services, the announcement said. Consumers will automatically receive notices and a check by mail.

An Intuit spokesperson didn’t immediately return a request for comment.

“Intuit cheated millions of low-income Americans out of free tax filing services they were entitled to,” James said in a statement. “For years, Intuit misled the most vulnerable among us to make a profit. Today, every state in the nation is holding Intuit accountable for scamming millions of taxpayers, and we’re putting millions of dollars back into the pockets of impacted Americans.”

More from Personal Finance:
Education Department forgives loans of more than 110,000 people in public service
The Great Resignation is still red hot — but may not last
How much cash retirees need to weather a stock market downturn

Until recently, Intuit offered two free versions of TurboTax. One was through the IRS Free File Program, a public-private partnership that lets low-income Americans file their taxes for free. Intuit ended its participation in July 2021. (It had been available to taxpayers with income below about $39,000, according to an earlier complaint from the Federal Trade Commission.)

Intuit aggressively marketed another version (the TurboTax Free Edition) as “free,” but it’s only free for taxpayers with “simple” returns as defined by Intuit, according to the announcement. Users without a simple return must upgrade to a paid version of the tax service.

(For tax-year 2021, Intuit refers to a simple return as one that can be filed on a Form 1040 with limited attached schedules, like one that includes student-loan interest paid, according to the FTC.)

This is a developing story. Check back for updates.

Inflation Barreled Ahead at 8.3% in April From a Year Ago, Remaining Near 40-year Highs

The Fed Is Expected to Raise Rates by a Half Point. Investors Wonder If It Will Get More Aggressive

cnbc.com
“Mobilization of the world must outpace a next military mobilization of our joint enemy,” Zelenskyy said via videoconference at the World Economic Forum in Davos, Switzerland.
Bloomberg | Bloomberg | Getty Images

Ukrainian President Volodymyr Zelenskyy on Wednesday said the supplies of Western tanks must outpace another Russian attack, reviving Kyiv’s push for the delivery of heavily armored vehicles amid fears the Kremlin could soon launch a new mobilization drive.

“Mobilization of the world must outpace a next military mobilization of our joint enemy,” Zelenskyy said via videoconference at the World Economic Forum in Davos, Switzerland.

“The supplying of Ukraine with air defense systems must outpace Russia’s next missile attacks. The supplies of Western tanks must outpace another invasion of Russian tanks.”

His comments come amid speculation that Russian President Vladimir Putin may be poised to announce another mobilization round.

Analysts at the Institute for the Study of War, a U.S.-based think tank, said Tuesday that Putin may announce “a second mobilization wave in the coming days, possibly as soon as January 18.”

Poland, France and the U.K. have recently pledged to send tanks to the Ukrainian military, while Finland says it could also donate a small number of German-made Leopard 2 tanks to help Kyiv protect itself.

Germany’s government said last week, however, that it has no plans to provide Ukraine with the Leopard 2 tanks.

‘Another horrible day for Ukraine’

Earlier on Wednesday, the three main figures of Ukraine’s Interior Ministry died in a helicopter crash in a suburb of the capital Kyiv.

The helicopter fell near a kindergarten and a residential building in Brovary with the cause of the crash being investigated.

Zelenskyy described the incident as a “tragedy” and led delegates at Davos in a minute’s silence “to honor the memory of every person Ukraine has lost.”

Separately, Ukrainian first lady Olena Zelenska said at a news conference that it was “another horrible day for Ukraine.”

Holiday sales fell short of industry expectations, as shoppers felt pinched by inflation and rising interest rates, according to data from the National Retail Federation.

Sales during November and December grew 5.3% year over year to $936.3 billion, below the major trade group’s prediction for growth of between 6% and 8% over the year prior. In early November, NRF had projected spending of between $942.6 billion and $960.4 billion.

The gains include the impact of inflation, too, which drives up total sales. The consumer price index, which measures the cost of a broad mix of goods and services, was up 6.5% in December compared with a year ago, according to the Labor Department.

For retailers, the shopping season’s results reflect the challenges ahead. As Americans continue to pay higher prices for groceries, housing and more month after month, they are racking up credit card balances, spending down savings and having fewer dollars for discretionary spending.

This is breaking news. Please check back for updates.

Microsoft, Amazon and Other Tech Companies Have Laid Off More Than 60,000 Employees in the Last Year

The job cuts in tech land are piling up, as companies that led the 10-year bull market adapt to a new reality.

Microsoft said Wednesday that it’s letting go of 10,000 employees, which will reduce the company’s headcount by less than 5%. Amazonfresh round of job cuts Wednesday that are expected to eliminate more than 18,000 employees and become the largest workforce reduction in the e-retailer’s 28-year history.

The layoffs come in a period of slowing growth, higher interest rates to battle inflation, and fears of a possible recession next year.

Here are some of the major cuts in the tech industry so far. All numbers are approximations based on filings, public statements, and media reports:

Microsoft is cutting 10,000 employees through March 31 as the software maker braces for slower revenue growth. The company is also taking a $1.2 billion charge.

“I’m confident that Microsoft will emerge from this stronger and more competitive,” CEO Satya Nadella announced the move in a memo to employees that was posted on Microsoft’s website Wednesday. The move will reduce Microsoft’s headcount by less than 5%, and some employees will find out this week if they’re losing their jobs, he wrote.

Google parent company Alphabet15% of employees from its health sciences division Verily. Google itself has not undertaken any significant layoffs as of Jan. 18, but employees are increasingly growing worried that the axe may soon fall.

Crypto.com announced plans to lay off 20% of its workforce Jan. 13. The company had 2,450 employees, according to PitchBook data, suggesting around 490 employees were laid off.

CEO Kris Marszalek said in a blog post that the crypto exchange grew “ambitiously” but was unable to weather the collapse of Sam Bankman-Fried’s crypto empire FTX without the further cuts.

“All impacted personnel have already been notified,” Marszalek said in a post.

On Jan. 10, Coinbasecut about a fifth of its workforce as it looks to preserve cash during the crypto market downturn.

The exchange plans to cut 950 jobs, according to a blog post. Coinbase, which had roughly 4,700 employees as of the end of September, had already slashed 18% of its workforce in June saying it needed to manage costs after growing “too quickly” during the bull market.

“With perfect hindsight, looking back, we should have done more,” CEO Brian Armstrong told CNBC in a phone interview at the time. “The best you can do is react quickly once information becomes available, and that’s what we’re doing in this case.”

Salesforce is cutting 10% of its personnel and reducing some office space as part of a restructuring plan, the company announced Jan. 4. The company employed more than 79,000 workers as of December.

In a letter to employees, co-CEO Marc Benioff said customers have been more “measured” in their purchasing decisions given the challenging macroeconomic environment, which led Salesforce to make the “very difficult decision” to lay off workers.

Facebook parent Metamost significant round of layoffs ever in November. The company said it plans to eliminate 13% of its staff, which amounts to more than 11,000 employees.

The tech giant’s cuts come after it expanded headcount by about 60% during the pandemic. The business has been hurt by competition from rivals such as TikTok, a broad slowdown in online ad spending and challenges from Apple’s iOS changes.

Shortly after closing his $44 billion purchase of Twitter in late October, new owner Elon Musk cut around 3,700 Twitter employees, according to internal communications viewed by CNBC. That’s about half the staff. Since then, significantly more employees have quit after Musk changed some company policies around working from home and wrote that he expected all employees to commit to a “hardcore” work environment.

In a tweet on Nov. 4, Musk said there was “no choice” but to lay off employees, as the company was losing $4 milion per day.

Lyft announced in November that it cut 13% of its staff, or about 700 jobs. In a letter to employees, CEO Logan Green and President John Zimmer pointed to “a probable recession sometime in the next year” and rising rideshare insurance costs.

For laid-off workers, the ride-hailing company promised 10 weeks of pay, healthcare coverage through the end of April, accelerated equity vesting for the Nov. 20 vesting date and recruiting assistance. Workers who had been there for more than four years will get an extra four weeks of pay, they added.

Online payments giant Stripe announced plans to lay off roughly 14% of its staff, which amounts to about 1,100 employees, in November.

CEO Patrick Collison wrote in a memo to staff that the cuts were necessary amid rising inflation, fears of a looming recession, higher interest rates, energy shocks, tighter investment budgets and sparser startup funding. Taken together, these factors signal “that 2022 represents the beginning of a different economic climate,” he said.

Stripe was valued at $95 billion last year, and reportedly lowered its internal valuation to $74 billion in July.

In July, Shopify announced it laid off 1,000 workers, which equals 10% of its global employees.

In a memo to staff, CEO Tobi Lutke acknowledged he had misjudged how long the pandemic-driven e-commerce boom would last, and said the company is being hit by a broader pullback in online spending. The company’s stock price is down 78% in 2022.

Netflixtwo rounds of layoffs. In May, the streaming service eliminated 150 jobs after Netflix reported its first subscriber loss in a decade. In late June, Netflix announced another 300 layoffs.

In a statement to employees the company said, “While we continue to invest significantly in the business, we made these adjustments so that our costs are growing in line with our slower revenue growth.”

In late August, Snap announced it laid off 20% of its workforce, which equates to over 1,000 employees.

Retail brokerage firm Robinhood cut 23% of its staff in August, after slashing 9% of its workforce in April. Based on public filings and reports, that amounts to more than 1,100 employees.

In June, TeslaElon Musk wrote in an email to all employees that the company is cutting 10% of salaried workers. The Wall Street Journal estimated the cuts would come to about 6,000 employees, based on public filings.

“Tesla will be reducing salaried headcount by 10% as we have become overstaffed in many areas,” Musk wrote. “Note this does not apply to anyone actually building cars, battery packs or installing solar. Hourly headcount will increase.”